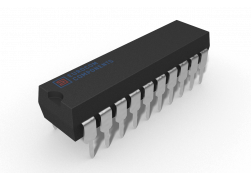 A converter that converts discrete signals in the form of binary digital values to analog values based on standard values (or reference values), called a DAC.

The most common digital-to-analog converter converts parallel binary digital values to DC voltage or DC current. It is often used as the output channel of a computerized process control system and is connected to an actuator to realize automatic control of a manufacturing process. D/A converter circuits are also used in the design of analog-to-digital converters using feedback technology.

Composition and characteristics of the DAC

The DAC is mainly composed of digital registers, analog electronic switches, positional power supply, summing operational amplifier, and a voltage reference (or constant current source). Use the digits of the digital value stored in the digital register to control the analog electronic switches of the corresponding digits so that the digit with the digit 1 generates a current value proportional to its position weight in the position weights network, and then an operational amplifier monitors each Sum current value and converts it to a value voltage.

Depending on the difference in the bit network, various types of DACs can be formed, such as a resistance-weighted DAC, an R-2R inverted T-resistance DAC, and a single-digit current DAC. The DAC conversion accuracy of the impedance weighted circuit depends on the reference voltage VREF as well as the accuracy of the analog electronic switch, op amp and the value of each impedance weighted. Its disadvantage is that the resistance value of each weighting resistor is different. When the number of discharges is large, the resistance value varies greatly, which makes it very difficult to ensure accuracy, especially in the manufacture of integrated circuits. Therefore, an integrated DAC. This circuit is rarely used alone.

It consists of several identical R and 2R network sections, and each section corresponds to an input bit. The nodes are connected in series to form an inverted T-shaped network. Inverted T-Resistor R-2R DAC is a kind of faster speed and more applications. Compared to a weighted resistance network, since it only has two resistance values R and 2R, it overcomes the disadvantages of a large resistance value of the resistance weight and a large difference in resistance.

The current-type DAC switches the constant current source to the resistor network. The DC power supply has a large internal resistance, which is equivalent to an open circuit. Therefore, together with the electronic switch, the effect on the conversion accuracy is relatively small. The saturation ECL switch circuitry allows this DAC to achieve high conversion speed and high conversion accuracy [1].

The main characteristics of a digital-to-analog converter include the following aspects:

Refers to the ratio of the minimum output voltage (the corresponding digital input has only the least significant bit as "1") and the maximum output voltage (the corresponding digital input has all valid digits as "1"). For example, an N-bit D / A converter has a resolution of 1 / (2 ^ N-1). In practice, the method of expressing the size of the resolution is also expressed in the number of digits of the input digital quantity.

The magnitude of the non-linear error represents the linearity of the digital-to-analog conversion. And the percentage of the ratio of the deviation of the ideal input and output characteristics to the full-size output is defined as non-linear error.

The conversion speed is usually determined by the tuning time. From the moment the input signal changes from all zeros to all ones until the output voltage stabilizes within the FSR ± ½LSB range (or the range specified in FSR ± x% FSR), this period of time is called the tuning time, i.e. maximum DAC response time, so use this to measure conversion speed.

At full scale conditions, for each 1° C rise in temperature, the percentage change in power output is defined as a temperature coefficient.

Typically, the main environmental and operating conditions that affect D/A conversion accuracy are changes in temperature and power supply voltage. Since the operating temperature will affect the weighted resistance circuit of the op-amp, nominal accuracy can only be guaranteed over a specific operating range.

The deviation between the output value and the ideal output value (full scale) when expressing the input data is usually expressed as the number of least significant digits or as a percentage of the deviation value relative to full scale.