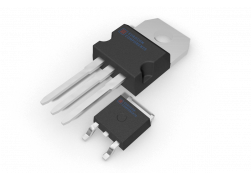 To buy thyristors and triacs in Ukraine

Thyristors and their features

A thyristor is an electronic component made from a semiconductor material that was introduced in the 1950s. It has four semiconductor layers called PNPNs.

The symbol for a thyristor is a diode, but with an additional input on the side called the gate or gate electrode. A thyristor does not normally conduct current between the main voltage connections, but it does begin to conduct when a positive current is applied to the control system, which is called turn-on. In this case, the thyristor remains conductive, regardless of whether the control current is interrupted or even becomes negative. It stops conducting when the main current through it drops below a certain value, close to 0. For AC, this means that it lights up when the control voltage turns on and off just before the zero crossing for each cycle, allowing the thyristor to precede the control circuit, which regulates when during a period the control voltage is turned on, the power can be regulated in AC circuits.

Because power thyristors often conduct high currents, large conductor areas and efficient cooling are required. Therefore, a large thyristor looks like a washer, the edge of which is made of corrugated porcelain, and the flat top and bottom parts, anode and cathode connections are flat polished metal sheets

When using phase angle control, thyristors can cause electrical interference, so-called harmonics. Filters are the most common way to reduce interference, but they have questionable effects, especially when multiple thyristors are used.

The disadvantage of a "classic" thyristor is that it does not stop conducting current until the voltage across it changes polarity. Therefore, another type of thyristor was developed, the GTO thyristor, where GTO is an abbreviation for “Gate Turn Off”. GTO thyristors have been largely replaced by IGBTs in many applications as they have many advantages over GTO thyristors.

TRIAC, or "AC triac", is an electronic component composed of a semiconductor material with two controlled half-wave rectifiers (thyristors) connected in an antiparallel connection (connected in parallel, but with reverse polarity on one) with a gate connected. TRIACs are part of the thyristor family and are closely related to the silicon rectifier (SCR). Unlike thyristors, which are unidirectional components (that is, they can only conduct current in one direction), thyristors are bi-directional. Another significant difference from SCR is that the current through the triac can be triggered by both positive and negative current through the gate, where the SCR can only be triggered with current entering the gate. To trigger the TRIAC, a positive or negative voltage must be applied to the gate.

Once the triac starts to drive, it continues to drive until the current falls below a certain limit (holding current). The ability to conduct current in both directions makes Triac switches easy to use for AC circuits. They also have the ability to drive large effects with milliampere currents through their gates. In addition, a firing pulse with a specific phase angle in the AC cycle provides the ability to control the ratio of the current flowing through the SYSTEM MOTOR to the load (phase control), which is often used to control the speed of motors or to dim lamps and to control an electrical element.

Typical use as a dimmer. Low power triacs are used in many applications such as dimmers, speed control of electric fans and other motors, and modern computerized control circuits in many household appliances.