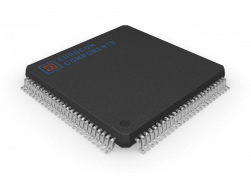 To buy microcontrollers in Ukraine

These circuits are optimized for the control and operation of other electronic components, and the most common use is in embedded systems. It is by far the most common type of microprocessor in terms of the number of circuits sold. According to a poll conducted in 2000, more than 90 percent of all microprocessors sold were of this type.

Single-chip computers are available in many performance classes and with different word lengths (4, 8, 16, 24, 32 bits, etc.), but the separation is far from strict. The simplest 4-bit circuits are used for simpler monitoring and control systems, and 8-bit systems can be found in many consumer products. More powerful 16- and 32-bit circuits often have performance close to those of modern personal computers and are used in broadband routers, mobile phones, and automobiles, among others.

During development, circuits with programmed memory such as flash (formerly EPROM) are used, since it can be overwritten. During production, they are often replaced with so-called OTP NVM memory devices, which can only be programmed once during production (or masked ROM for really large series). Programs are written on personal computers in assembly languages or high-level languages such as C, C, and Basic. Transferring to the program memory of the microcontroller is called programming.

DSP processors are a special class of microprocessors. They are optimized for signal processing applications and are found in radio circuits of mobile phones and the decoding part of DVD players.