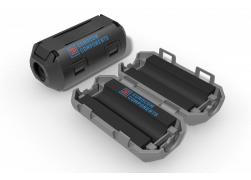 To buy ferrite heads in Kiev and Ukraine

Ferrite is a ferromagnetic metal oxide. In terms of electrical properties, the specific resistance of ferrite is much greater than that of magnetic materials made of metals and alloys, and it also has higher dielectric properties. The magnetic properties of ferrites also show that they have high magnetic permeability at high frequencies. Therefore, ferrite has become a non-metallic magnetic material widely used in the field of high frequency weak current. Since the magnetic energy stored per unit volume of ferrite is small, the saturation magnetization is also small (typically 1/3 to 1/5 pure iron), which limits its use in low frequency strong electricity and high power applications.

Ferrites and their types

Ferrite is made from iron oxides and other ingredients. Generally, it can be divided into three types: permanent ferrite, soft ferrite and gyromagnetic ferrite.

Permanent magnet ferrite is also called ferrite magnet, which is the small black magnet we usually see. Its main raw materials are iron oxide, barium carbonate or strontium carbonate. After magnetization, the strength of the residual magnetic field is high, and the residual magnetic field can be maintained for a long time. Commonly used as a permanent magnet material. Example: speaker magnets.

Soft ferrite is prepared and sintered from iron oxide and one or more other metal oxides (such as nickel oxide, zinc oxide, manganese oxide, magnesium oxide, barium oxide, strontium oxide, etc.). It is called soft magnetic because when the magnetizing magnetic field disappears, there is practically no residual magnetic field. Commonly used as a choke coil or intermediate frequency transformer core. This is completely different from permanent ferrite.

According to different magnetic properties and applications, ferrites can be divided into five types:

A compound with a uniaxially anisotropic hexagonal structure. It is mainly barium, strontium, lead, three kinds of ferrite and its composite solid solution. There is same-sex magnetism and opposite-sex magnetism. Since this type of ferrite material can maintain a strong permanent remanence for a long time after the external magnetization field disappears, it can be used to create a permanent magnetic field in an external space. Its applications are very wide, for example: it is used as a permanent magnet in various electricity meters, generators, telephones, speakers, televisions and microwave devices.

This applies to ferrite materials with rectangular hysteresis loops. Its characteristic is that in the presence of a small external magnetic field, it can become magnetized and reach saturation. After the removal of the external magnetic field, the magnetism remains the same as at saturation. For example, magnesium manganese ferrite, lithium manganese ferrite and so on. This ferrite material is mainly used in memory cores and other components of various electronic computers.

This type of material refers to ferrite materials that mechanically lengthen or shorten in the direction of a magnetic field when magnetized, such as nickel-zinc ferrite, nickel-copper ferrite, and nickel-chromium ferrite. Piezomagnetic materials are mainly used as transducers for the mutual conversion of electromagnetic energy and mechanical energy, as well as magnetostrictive elements for ultrasound.

Application area
Magnetic materials are widely used in electroacoustics, telecommunications, electric meters, motors, and can also be used as memory components, microwave components, etc. It can be used to record language, music and graphic information tapes, magnetic storage devices for computers and magnetic cards for passenger boarding passes and fare calculation. The following focuses on the magnetic materials used on magnetic tape and how it works.