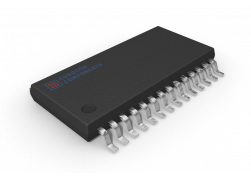 What do you need to know about microcircuits temperature converters from Microchip Technology and analogs?

Microchip Technology Inc. In 2015, announced the release of the world's first thermocouple conditioning IC, the MCP9600, which integrates precision instrumentation, a precision temperature sensor, a high-precision, high-resolution digital-to-analog converter (ADC), and a preprogrammed firmware math engine. The math engine supports many standard thermocouple models (K, J, T, N, S, E, B, and R). The thermocouple is one of the most commonly used components for temperature measurement because it can maintain reliability and accuracy in harsh high temperature environments, and its temperature measurement range is extremely wide. The MCP9600 integrates many discrete components into a single chip to simplify thermocouple design while also reducing board footprint, cost, and power consumption.

Scope and use of microcircuits

Thermocouples are widely used for temperature measurement in industrial, consumer, automotive, aerospace, petrochemical and other fields. The MCP9600 provides developers with the world's first plug-and-play thermocouple design solution. Since with the MCP9600 it is not necessary to have the professional knowledge required to implement discrete components such as using a single chip math processor to develop firmware. Designers no longer need to create a precision instrument circuit to accurately measure a microvolt thermocouple signal, or create an ADC circuit for accurate temperature calculations. With the MCP9600's built-in cold junction compensation, the reference thermocouple cold junction temperature can be accurately measured by calculating the thermocouple hot junction temperature without the need for professional thermal calculations.

The MCP9600 was the only one system-on-chip thermocouple conditioning IC on the market in 2015. It provides a fully integrated plug-and-play solution for mission-critical applications, helping customers save R&D time and resources. Other features of the MCP9600 include a digital filter for temperature data, which can minimize the effects of temperature fluctuations, system noise, and electromagnetic interference. Its shutdown mode reduces power consumption of the entire system, and its four user programmable temperature alarm outputs reduce system microcontroller overhead and reduce code footprint, further simplifying design. The MCP9600 adopts a 20-pin 5x5mmmQFN package, further reducing board footprint and manufacturing cost.

In the catalog of the official dealer of electronic components Eurocom Components, you can order even more modern models of temperature transducer microcircuits from this and other manufacturers.