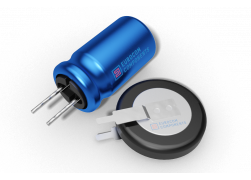 A supercapacitor (supercapacitor) is a type of capacitor with a very high capacity, it can store very high electrical charges. High capacitance is achieved through the electrical double layer, which means a very large area between the capacitor "plates". This is desirable because a large area means a large capacity. The fact that the surface becomes large is due to the molecules in the capacitor being wound on top of each other;

Areas of use of the supercapacitor

High capacity can be used for energy storage. Chemical batteries are commonly used for mobile energy storage, but capacitors can charge and discharge much faster than batteries. In addition, capacitors can be charged in significantly more charge cycles than batteries. This means that supercapacitors are very useful for short-term energy storage when they go through many charge cycles without degrading performance. Some areas of use are, for example, storing braking energy in vehicles or opening emergency doors in airplanes, as these areas require large amounts of energy to be stored or quickly accessed. However, the energy density in supercapacitors is lower than in conventional batteries.