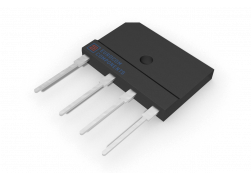 Buy diode output bridges in Kiev and cities of Ukraine

A diode bridge is a bridge configuration with four or more diodes. Regardless of the negative polarity of the input voltage, the output polarity can be maintained.

Most commonly, a diode bridge is used to convert alternating current (AC) to direct current (DC), also known as a bridge rectifier. The bridge rectifier can perform full-wave rectification with two-wire AC input voltage. Other rectifying methods can use a center secondary transformer and then connect the output to a three-pin input rectifier, but the cost of the bridge rectifier has weight advantages.

The main feature of a diode bridge is that the polarity of the output voltage does not change with the input voltage. The diode bridge was invented by the Polish electrical engineer Karol Pollack and applied for a patent in the UK in December 1895  and in January 1896 in Germany. German physicist Leo Graetz independently invented a similar circuit in 1897 and published it. In some documents, this scheme is still called the Gretz scheme or the Gretz bridge.

Before the popularization of integrated circuits, four diodes were used to build a diode bridge. Since 1950, four diodes have been used to form a bridge. Electronic components housed in a single housing have become standard commercial products. Currently, there are different voltage and current ratings.

In addition to the diode bridge in the voltage doubler, the diode and capacitor also have a bridge configuration.